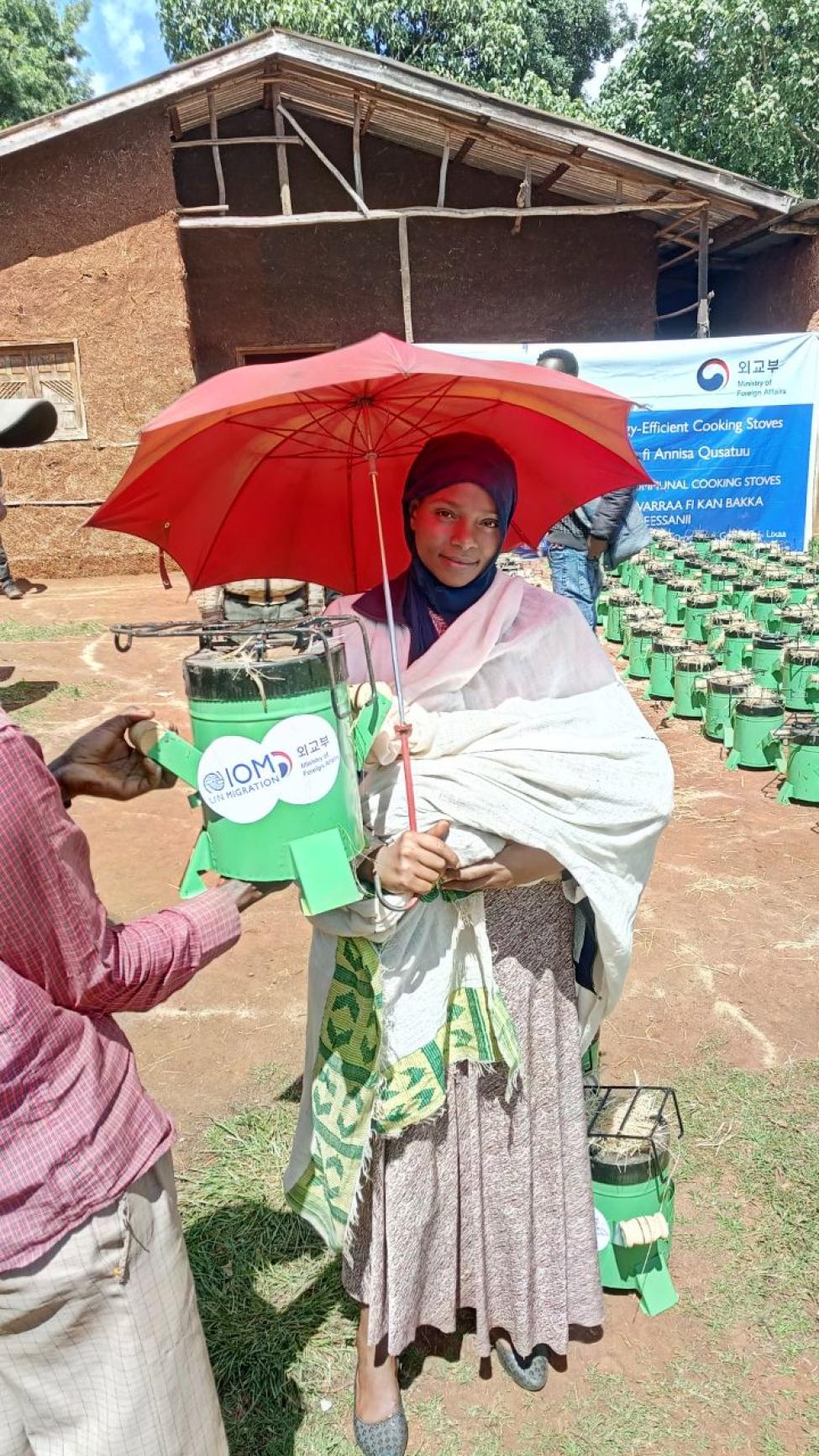 Addis Ababa – Energy efficient cooking stoves for 5,447 households and 381 communal kitchens were distributed by IOM Ethiopia as part of an initiative that will end this month. The energy-efficient cooking-stoves complement the International Organization for Migration (IOM)’s ongoing humanitarian assistance to Internally Displaces Persons and affected populations in the Gedeo-Guji crisis.

Gedeo, West Guji and East Wollega Zones are among the most densely populated areas in Ethiopia, with the majority of IDPs and host communities in these rural locations heavily dependent on forest wood for cooking fuel.

These improved cooking stoves (ICSs) are boosting the wellbeing of displacement affected communities and supporting the government of Ethiopia’s efforts to mitigate the impact of displacement on the environment. They directly empower households, at the same time helping to reduce disputes over strained firewood resources.

In addition to communal stoves to bake kocho – a local staple food – vulnerable households, especially those headed by women, were supplied with family-sized, fuel-saving stove kits for cooking.

The locally procured stoves consume less wood fuel and are more energy efficient compared to traditional stoves. Besides reducing the strain on local forests, the project will also reduce the risk from smoke inhalation and help reduce women and girl’s vulnerability whilst collecting firewood.

Before hand-over, 156 local officials and 6,500 targeted community members from 8 woredas (districts) and 32 kebeles (wards) were trained on fuel efficient energy and on how to use the kits.

Since 2018, Ethiopia has recorded one of the highest numbers of internally displaced persons (IDPs) in the world, with border conflicts as the primary driver. DTM Ethiopia reported the presence of 3 million IDPs across the country between March and June 2019.

Since then, a significant number of IDPs have returned to their places of origin as part of a phased return initiative that the government began in April.

Assessments conducted by IOM and World Vision (WVI), as well as concerns raised by humanitarian partners and government counterparts, highlighted lack of access to cooking fuel and competition over the resource as needing urgent intervention.

With firewood becoming increasingly scarce, IDPs are facing difficulty in accessing energy and find themselves competing with host communities, something likely to result in deterioration of inter-communal relations.

Moreover, firewood shortages are forcing most women to collect and burn different kinds of waste to fire their kitchens, thus exposing them to toxic smoke especially from burning plastic.

“Safe access to fuel and energy stands at the intersection of so many things that are of concern – from protection, to nutrition, to health, to the environment, to livelihoods and to education,” said Dawit Mulatu, IOM Ethiopia’s Community Stabilization Officer.

The initiative is an ongoing effort between the Ministry of Foreign Affairs of Republic of Korea and the International Organization for Migration (IOM).

In the coming months, IOM will conduct post-distribution monitoring to assess stove use, the satisfaction of beneficiaries, and to document lessons learned.