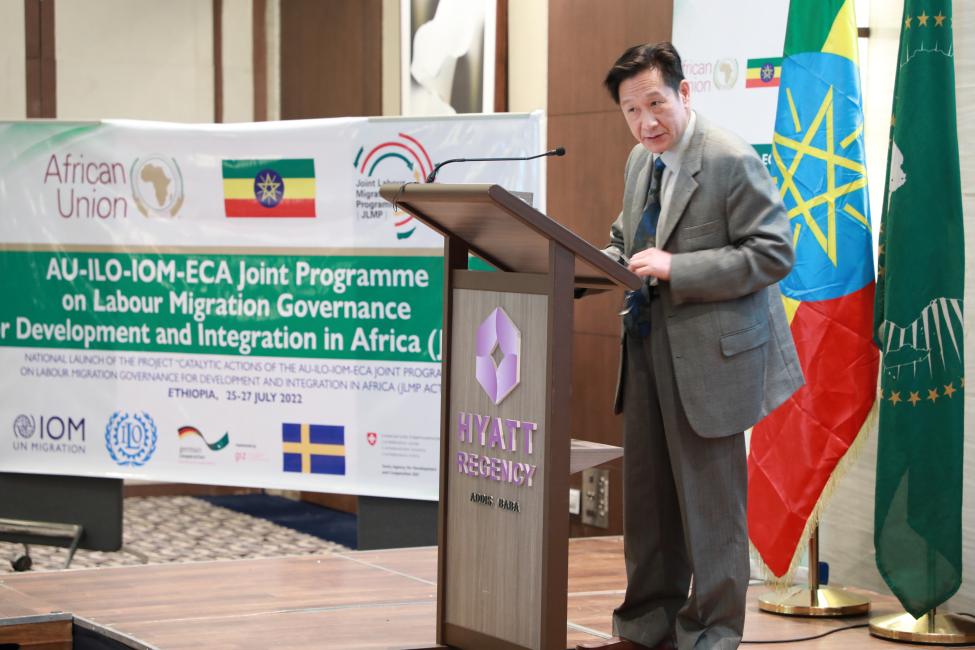 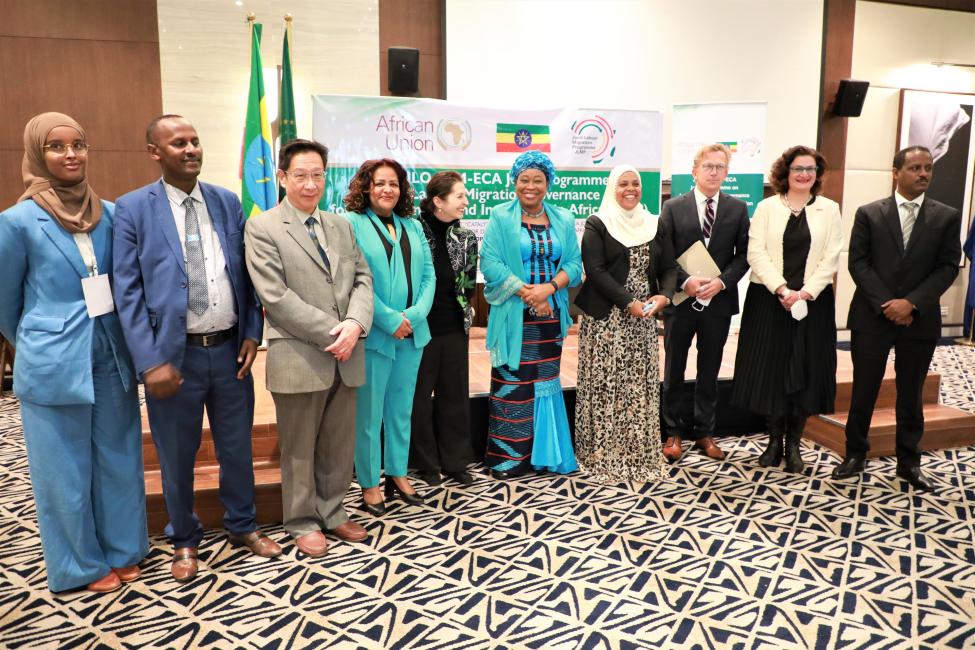 Addis Ababa - The "Catalytic Actions of the Joint AU-ILO-IOM-ECA Programme on the Governance of Labour Migration for Development and Integration in Africa (JLMP Action)" project was launched this week (25/7) in Ethiopia. This was the latest national launch for selected African Union Member States and Regional Economic Communities (RECs), following similar unveilings in Malawi, Cameroun and Cote d’Ivoire over the past few months.

‘JLMP Action’ is one of several projects making up the AU-ILO-IOM-ECA Joint Programme on Labour Migration Governance for Development and Integration in Africa (JLMP) that was launched in 2015 to implement the 5th Key Priority Area of the Declaration and Plan of Action on Employment, Poverty Eradication and Inclusive Development adopted by the Assembly of Heads of States and Governments in 2015 (AU/Assembly/AU/20(XXIV)/Annex 3, January 2015).
The Programme is strengthening the governance and regulation of labour migration in Africa, in line with the First 2023 Ten Year Plan of the AU’s Agenda 2063 and of the UN Sustainable Development Goals (SDGs).

The ceremony was attended by officials of the government of the Federal Democratic Republic of Ethiopia, the Embassies of Germany, Switzerland and Sweden, who are funding the Programme, as well as the African Union Commission (AUC), the International Labour Organization (ILO), International Organization for Migration (IOM) and Deutsche Gesellschaft für Internationale Zusammenarbeit (GIZ), who are implementing partners. Also in attendance were representatives of the Intergovernmental Authority for Development (IGAD), the Common Market for East and Southern Africa (COMESA), trade unions and of labour organizations.

The African Union’s Commissioner for Health, Humanitarian Affairs and Social Development, H.E. Minata Cessouma Samate said, “As the African Union Commission, our mandate includes promotion of safe, orderly, dignified and regular migration, as well as, providing support for the implementation of Member States’ policies on labour, employment, population, health and migration. We remain committed to supporting you to implement the priorities you have identified, to facilitate experience sharing with other Member States and to strengthen linkages with other complementary processes.”

Acting Chief of Mission of IOM Ethiopia and Representative to AU and ECA, Mr. Jian Zhao reiterated that IOM, in collaboration with the AUC and ILO, will implement JLMP activities in alignment with national policies and priorities with key initiatives including supporting the formulation of a gender-responsive labour migration policy, assisting relevant authorities in collecting and utilizing sex-disaggregated data on labour migration, capacity building initiatives for various stakeholders on labour migration governance and ethical recruitment to ensure the rights of migrant workers are promoted at all levels.

“ILO has a large project portfolio on labor migration in Ethiopia. Today, we are proudly adding to it the JLMP Action that focuses on effective management of labor migration and labor migration governance for development,” added Ms. Ruchika Bahl, Chief Technical Advisor for ILO Ethiopia.
In a speech read on his behalf, H.E. Tamara Mona, the Ambassador of Switzerland to Ethiopia and South Sudan, reiterated that tangible improvements in promoting better labour migration governance will only happen if there is change at the national and community level, commending Ethiopia for agreeing to implement the JLMP.

“Let me assure you that Switzerland’s commitment to supporting the government Ethiopia, the African Union and its Member States to implement this programme to achieve sustainable development in Africa is long term, in line with the JLMP strategic framework, and we also encourage other development partners to join forces in supporting this important Programme,” he added.

The first phase of the JLMP Action project is being rolled-out under the JLMP Strategic Framework and Monitoring and Evaluation Plan (2020-2030) led by the AUC, in collaboration with ILO and IOM, and with financial support from the Swiss Agency for Development and Cooperation (SDC). It will be implemented until December 2024 in two priority RECs, namely, COMESA and the Economic Community of Central African States (ECCAS), and five Member States - Cameroun, Cote d’Ivoire, Ethiopia, Malawi, and Morocco.

IOM, Ministry of Peace and KOICA Partner to Support the Government of Ethiopia’s Work Towards Sustainable Peace

Meeting in Kampala, African Youth Call for Ease of Movements within the Continent