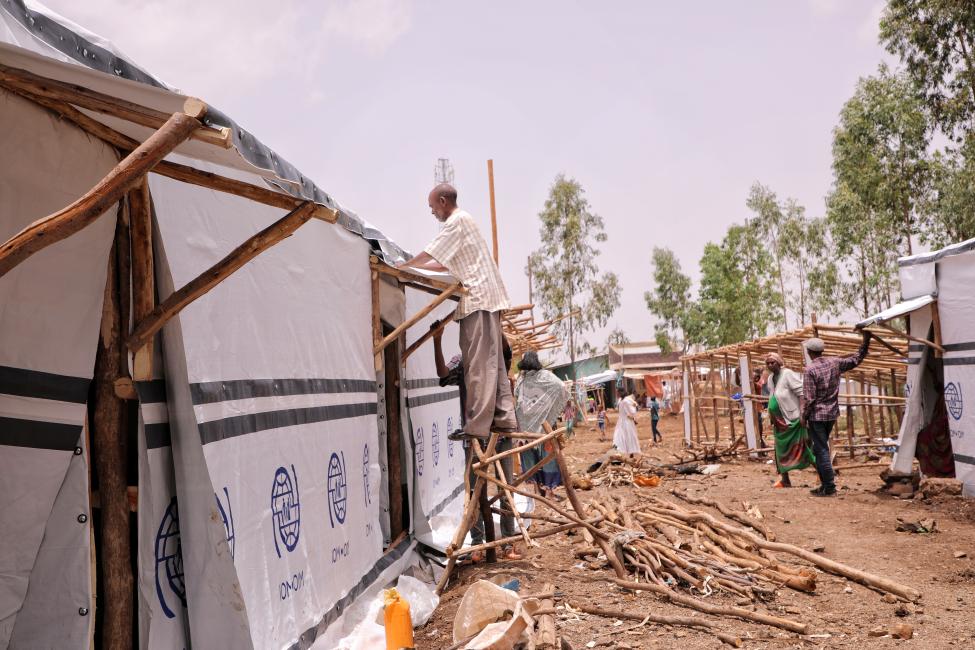 Since the outbreak of the conflict eight months ago in Ethiopia’s Tigray Regional State, millions of people are enduring unimaginable suffering, including forced displacement, hunger, death, and destruction of private and public property.

In Tigray, IOM has been providing support to more than half a million people, including displaced children, women, men, and vulnerable groups such as pregnant women and persons with disabilities. This includes shelter and provision of essential items such as food, water, clothing, medicine and supplies for babies, as well as sanitation and hygiene services.

IOM has also been supporting camp coordination and management efforts, providing mental health care to those in need, and producing Displacement Tracking Matrix (DTM) reports to shed light on the evolving situation.

Nearly USD 70 million (USD 69.3M) is needed to respond to the needs of internally displaced populations in northern Ethiopia but only USD 28.7 million has been received this year. IOM needs an extra USD 40.6 million for the remainder of 2021 to be able to continue and further expand its response to help the displaced.

“The nearly two million people displaced by this crisis continue to live in inhumane and undignified conditions and require critical and urgent support,” said Maureen Achieng, IOM Chief of Mission to Ethiopia and Representative to the African Union and UNECA. “IOM Director General António Vitorino said it before, and we say it again: we must act without delay to meet the needs of people in the region.”

The situation in Tigray remains volatile. In partnership and coordination with other UN agencies, IOM is committed to delivering life-saving humanitarian assistance, to continue reaching people in need. IOM is planning to significantly scale up response programming and increase the deployment of senior IOM staff in the region despite the severe shortage of funding.

IOM’s response is aligned with the Inter-Cluster Coordination Group’s (ICCG) – a cooperative effort among sectors and the Humanitarian Country Team to improve the national response – Northern Ethiopia Response Plan, which estimates that 5.2 million people are in dire need in the worst-case scenario of this escalating humanitarian crisis.

IOM’s Global Crisis Response Platform provides an overview of IOM’s plans and funding requirements to respond to the evolving needs and aspirations of those impacted by, or at risk of, crisis and displacement in 2021 and beyond. The Platform is regularly updated as crises evolve and new situations emerge.