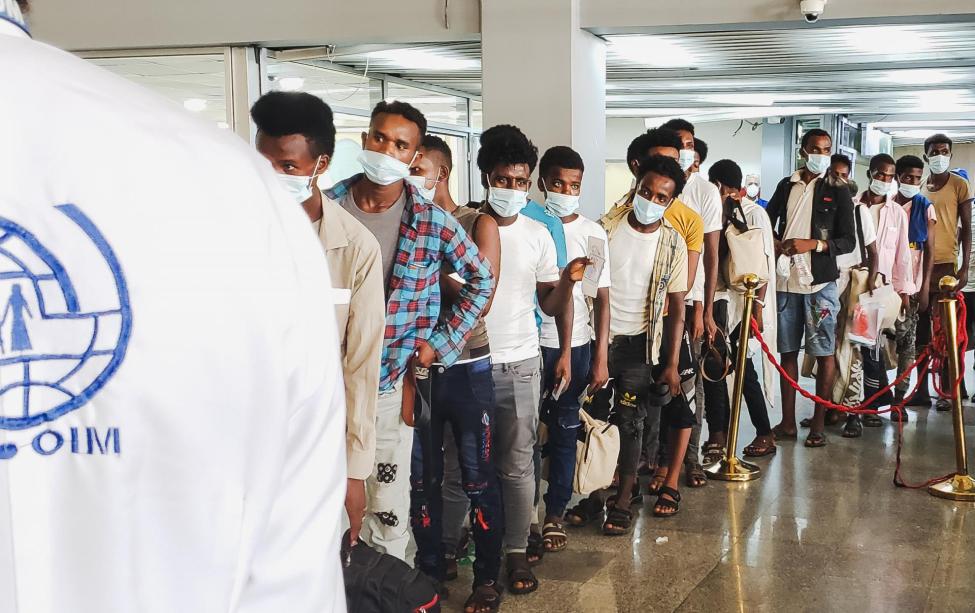 Aden – As the dangers for migrants in Yemen intensify against a backdrop of conflict and the COVID-19 crisis, nearly 5,000 Ethiopians stranded in Yemen are waiting for their chance to safely return home.

This week, about 300 migrants are scheduled to depart Aden for Addis Ababa on two Voluntary Humanitarian Return (VHR) flights run by the International Organization for Migration (IOM). The Organization hopes to continue at this pace, operating two flights per week until the end of the year and plans to expand VHR to other places such as Ma’rib where the conflict persists.

“Since the start of the pandemic, migrants in Yemen have been pushed even further into the shadows,” said John McCue, IOM Yemen’s Deputy Chief of Mission.

So far in 2021, 597 migrants have voluntarily returned on five flights from Aden and 79 others on a flight from Sana’a. A flight from Aden is set to land this afternoon in Addis Ababa and another from there is scheduled for Thursday – a promising sign of progress in securing more opportunities for stranded migrants to voluntarily return in the future.

To sustain this programme, IOM urgently needs USD 3 million from the international community, as well as the continued support of Yemeni and Ethiopian authorities to facilitate the movements.

“We call on donors to make more significant contributions to this crucial lifeline which provides thousands of stranded migrants with their only chance to escape a dangerous situation and make their way home,” McCue said.

An estimated 32,000 migrants are stranded in dire conditions in the country – mainly in urban transit hubs – due to COVID-19 mobility restrictions which have impeded their journeys to the Kingdom of Saudi Arabia (KSA).

These restrictions have meant that smuggling networks on this route are not as lucrative as they once were. To make up for financial losses, some are adopting alternative ways to exploit migrants and make a profit.

Some migrants are forced to work off their debts on farms while others are exposed to gender-based violence (GBV) and abduction for ransom. The vast majority lack access to water, food, sanitation and health care.

Many migrants have become increasingly desperate to return home. Since May 2020, an estimated 18,200 in Yemen have made the perilous return journey by sea to Djibouti or Somalia, using the same network of smugglers they used heading to the Arabian Peninsula. Dozens of migrants have drowned this year after overcrowded boats capsized.

“I've been beaten, detained, and exploited in Yemen,'' said Tigist*, a 24-year-old woman from Ethiopia who travelled home last week. Most nights I went hungry. After everything that happened to me, I am happy to go back to my home and family."

Of those who have travelled home on VHR flights this year, 20 are under the age of 18. More than 10 per cent of new arrivals to Yemen are unaccompanied minors. The so-called Eastern Corridor has some of the world's highest proportions of children using an irregular migration route. In addition to arranging the flights, IOM offers counselling to the migrants before they leave, helps them secure travel documents and liaises with authorities in Yemen and Ethiopia to ensure safe passage and transit.

In Ethiopia, returning migrants are temporarily accommodated at the IOM transit centre, where they are given food, essential non-food items, counselling services, and a transport allowance to their final destinations. The Organization also arranges medical and psychological care, as well as family tracing and reunification for unaccompanied migrant children.

“Facilitating safe voluntary return of migrants from Yemen remains to be an extremely critical programme, and ought to be accompanied by lasting solutions to irregular migration,” said Malambo Moonga, Head, Migration Management Unit for IOM Ethiopia.

“We continue to appeal for investments in sustainable reintegration of returnees and resilience-building in Ethiopian communities with high rates of irregular migration.”

With the recent loosening of restrictions on international movements, migrant arrivals into Yemen have started to show a slow increase, although the overall numbers remain low compared to pre-pandemic years.

*Name has been changed to protect her identity