Gondar, Ethiopia – With dusk falling, the reception area at Alem Wach refugee camp in Dabat, North Gondar, Amhara region, Ethiopia, becomes a hive of activity as women, men, and children hurry to get off several buses before milling around the few trucks offloading their personal belongings.

These newly arrived refugees have been successfully transported from camps in Mai Tsebri, 150 kilometers away, on the border between Ethiopia's Amhara and Tigray regions, in one of the final convoys organized by the International Organization for Migration (IOM).

International humanitarian organizations, including IOM, have begun to access refugee sites in some areas of Tigray to provide services following a peace agreement signed in early November between the Ethiopian government and the Tigray People's Liberation Front (TPLF), which permits unrestricted humanitarian access to the region after nearly two years of conflict.

Over the course of several weeks since October 2022, IOM, Ethiopia's Refugee and Returnees Service agency (RRS), and UNHCR, the UN Refugee Agency, have relocated over 7,000 refugees from Mai Tsebri in the country's conflict-torn northern region of Tigray to a new camp in the Amhara region.

There is no way to rush the journey from Mai Tsebri to Dabat since parts of the route meanders through tight mountainside curves that overlook precipitous ravines and escarpments, adding to the difficulty of the trip, particularly for the bus and truck drivers. 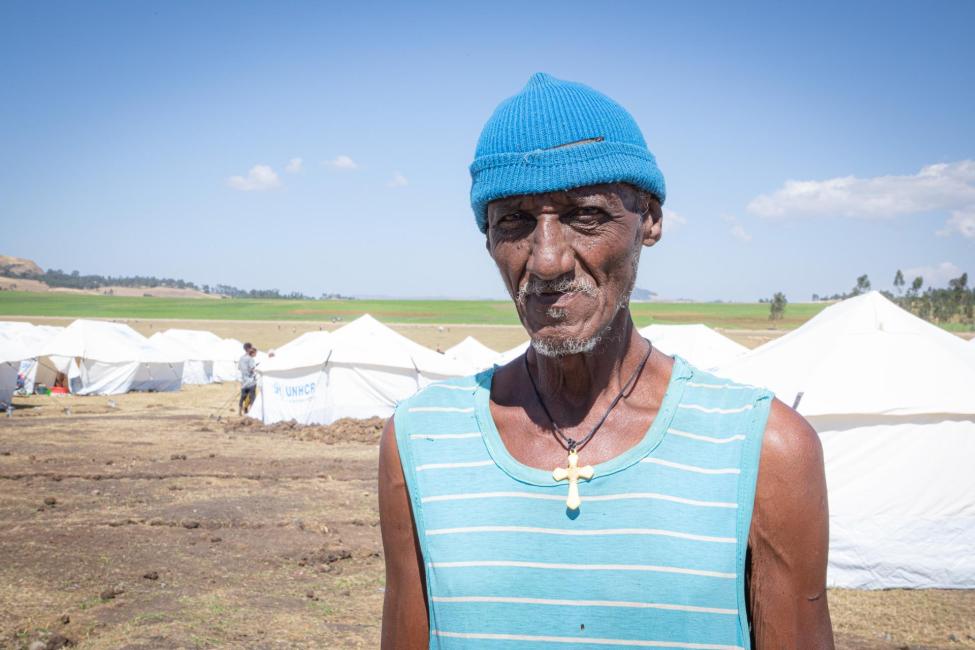 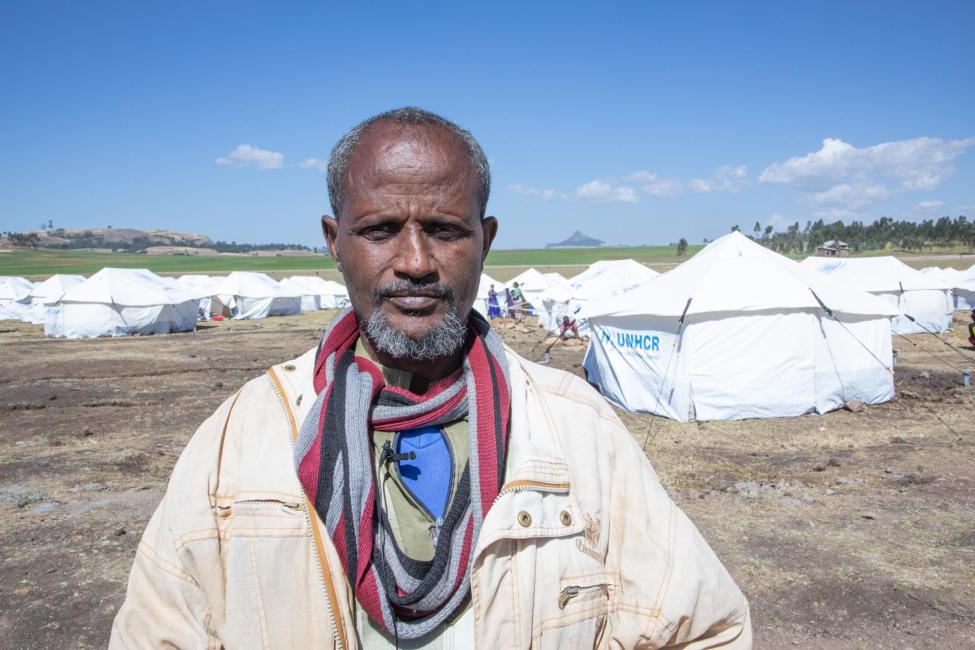 Some of the new arrivals who were assisted by IOM to relocate to Alem Wach in November 2022. Photos: IOM/ Eric Mazango, 2022

Teoges, 58, who arrived in the Alem Wach from Adi Harush camp a few weeks before this convoy is still adjusting to his new surroundings. "Dabat is quite different from Mai Tsebri, it is considerably colder, but we are coping. When we came, we had a great day traveling to Alem Wach on IOM buses, and we want to thank the drivers for their careful and excellent driving along the difficult road," he says, as a few onlookers huddle close to him.

Around 22,000 refugees are now housed at Alem Wach, a major camp in Dabat run by RRS and UNHCR. On an 80-hectare rolling plain with a small stream through it, contractors are hard at work erecting new transitional shelters to expand the site. 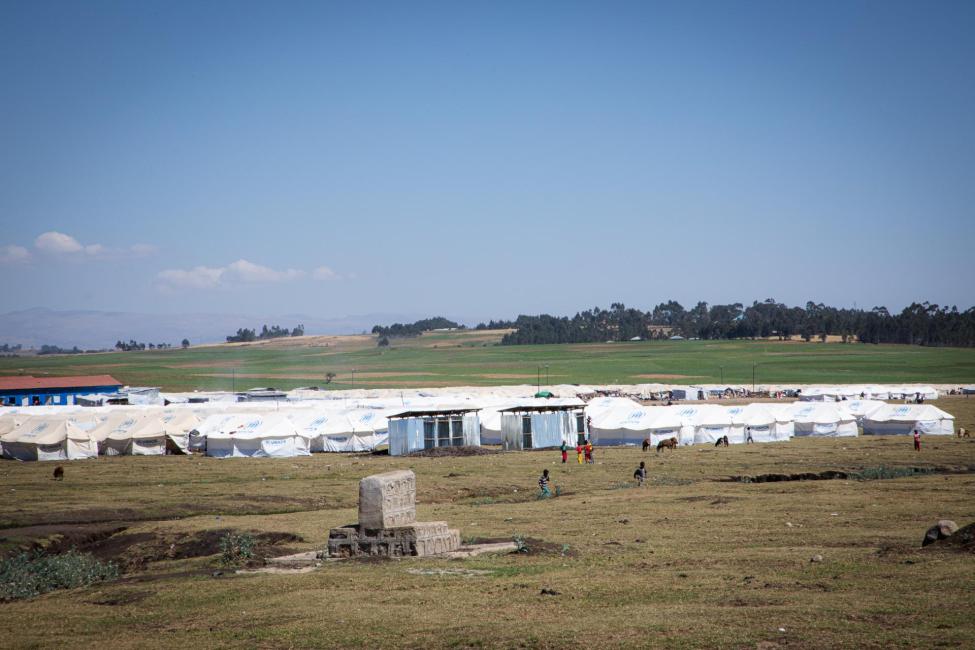 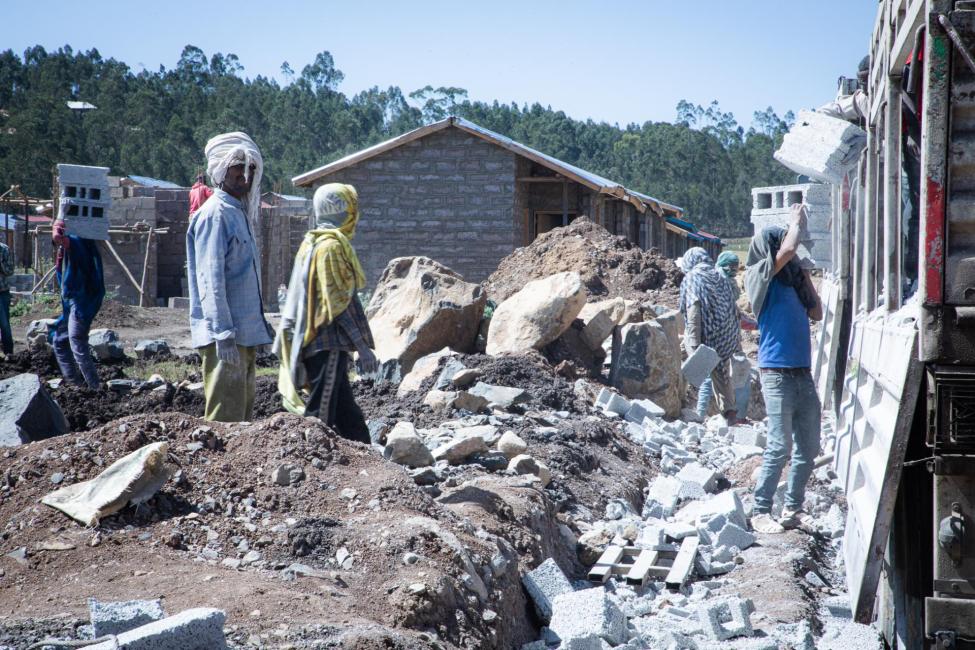 As we take a walkabout tour of the location with RRS representatives, a UNHCR representative remarks, "The first batch of refugees arrived in Dabat spontaneously in 2021, with the recent convoys being part of facilitated relocations that followed the peace accord and cessation of hostilities."

Several residents of the camp, who seem to have now settled in, can be seen traversing the less than two-kilometer dusty road that leads into Dabat town by foot, horse carts, and ubiquitous three wheelers.
RRS transferred 2,084 refugees to the Alem Wach camp in Dabat Woreda, North Gondar Zone. These refugees had been all but abandoned and left without assistance for approximately two years because of the conflict that broke out in the northern region of Ethiopia in November 2021.

IOM was tasked by the government of Ethiopia to expedite the movements process, and in the first three weeks of November 2022 it transferred 4,991 more refugees by bus, bringing the number of refugees safely ferried from Mai Tsebri to over 7,000.

“This was a complicated movement where thousands of people, including their property and domestic animals, were transported by road in eleven convoys of buses and trucks. We completed this movement thanks to the dedication of our operations staff who worked closely with RRS and UNHCR,” said Chief of Mission for IOM Ethiopia, Abibatou Wane.

Along with water and energy biscuits, the transported refugees received dignity and hygiene kits for the 150-kilometer journey. Besides transporting the refugees between camps, IOM staff also visit the site regularly to conduct fit to travel assessments and to arrange departures for refugees who have been identified for resettlement interviews in Addis Ababa.

A similar operation is currently taking place in Ethiopia's Afar region, which was also devastated by the violence and where, in November, 625 refugees were relocated from Logiya and Semera camps to the safer Berhale camp. An additional 1,400 refugees are also being relocated.

IOM provides emergency transportation and protection to vulnerable refugees from points of entry on land borders to designated camps, and relocation between camps across Ethiopia at request of UNHCR and the government.

The organization also assists with resettlement, family reunion, humanitarian, and other admission initiatives for refugees to third countries. More than 6,600 migrants and refugees were transported in Ethiopia in 2021, with nearly 3,000 refugees receiving assistance for resettlement in other countries.

The Bureau of Population, Refugees, and Migration of the US State Department (PRM) is generously supporting the movements.

A Second Chance for Ethiopian Migrants Returning to Their Homeland

Water and Hope Quickly Drying Up: Families Grapple with the Realities of Drought in Ethiopia

A Seed of Hope: Building Livelihoods and Resilience to Climate Change in Ethiopia